This article details exactly how to take an arbitrary server, install a *hardened* Windows Server 2008 R2 (W2K8R2) image on it, and then use that W2K8R2 server to deliver NFS to ESXi hosts. We had to do this recently to leverage a bit of local shared storage; read on to see the steps! We put in a lot of detail; the article just kept getting longer and longer – enjoy!

In our case we run in a secure environment where individual hosts must be scanned frequently by Information Assurance (IA). We start by configuring all of the networking components, then install a hardened version of W2K8R2, install and configure the Windows NFS Services role service, and serve to our ESXi hosts.

This section covers the physical setup for Redundant Array of Integrated Disks (RAID) as well as the operating system setup.

Normally you setup RAID at the system BIOS prompt; for example, with Dell PowerEdge (PE) servers you would press Ctrl+R during the boot process when prompted. This brings up the disk RAID controller setup screen. In general, setup RAID to maximize disk storage unless you have SATA disks of 1TB or more. This is because RAID5 provides the best disk space ratios of any RAID type compared to failure resiliency:

Additionally, there are other RAID types such as RAID10 (sometimes written “RAID1+0”); we don’t cover these RAID types here other than to note that they are combinations of the base RAID types. RAID10 is a combination of RAID1 (mirrored) and RAID0 (striped); it effectively means that you use RAID0 for a group of disks to stripe data and then mirror the entire RAID0 set to another group of disks. See Wikipedia for more info, however…

Based on the above, to maximize disk space while still being able to survive at least one disk failure, RAID5 is the clear winner. On the downside, RAID5 is slower when writing and can be very unsafe when using larger lower-quality SATA disk drives.

Regarding RAID5 and large SATA disk drives: A great NetApp whitepaper (“NetApp RAID-DP: Dual-Parity RAID 6 Protection Without Compromise”) posits that one can expect a 33.28% failure rate for SATA drives greater than 2TB. Where this becomes most problematic is the issue when using RAID5 – this RAID grouping stripes disk parity across all disks (effectively removing one disk’s worth of space from the array). The issue arises when a disk fails; the RAID5 group can automatically rebuild itself – which is great, unless another disk fails during the rebuild. In that case…data loss! The reason this becomes such a problem with large SATA disks is for two reasons:

So when rebuilding a RAID5 group on very large, lower-quality SATA drives it simply becomes much more possible that a second disk drive could hiccup or even fail entirely. Thus the 33.28% failure rate. Eck.

For our use case, disk failures are less of an issue. Our physical servers consist of Dell PE2900s with 750GB SATA drives (7.2K/RPM) and Dell PE2950s running 300GB SAS drives (15K/RPM). Thus we are less concerned about the perils of using RAID5 for disk management; as long as we have some spare disks in the datacenter *and* we can configure the RAID5 arrays to use a “hot spare” (separate disk ready to be integrated as soon as a disk failure is detected) we should be acceptable.

In our use case, servers were built from hardened “Army Golden Master” editions of Windows Server 2008 R2 with all service packs and patches applied. Additionally, these servers were joined to the local Active Directory (AD) and applied to the various AD group policy objects (GPOs). For example, one such GPO is named “WSUS Protected Servers” and provides the policy we use to ensure that Windows Server Update Services (WSUS) security patches do not result in unplanned automatic reboots.

To get full redundancy, a separate switch / network fabric should be used to differentiate management (e.g. remote access to server via Remote Desktop) from storage (access from the ESXi hosts to the NFS server running on the Windows Server 2008 R2 box). In this use case, we have two switches involved: a top-of-rack switch for the physical server (used for Management traffic – VLAN 210) and a separate storage switch (used for Storage traffic – VLAN 240).

This is straightforward; simply enable the port and set the Port-based VLAN ID (PVID) tag to “210” for the selected management NIC. This ensures that all network traffic outbound from the server over the switch will have a proper Virtual LAN (VLAN) tag applied to it where “210” is the VLAN tag that identifies management network traffic.

The following screen shows how, for a NetGear GS748TS programmable switch, a PVID can be set for a given connected port (the connection from the assigned NIC on the physical server to the RJ-45 port on the switch itself): 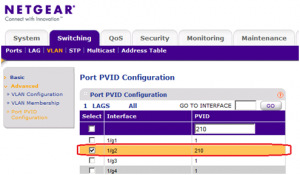 In the above shot, port 2 (1/g2 on the physical switch) has had a PVID of 210 applied to it. Again, this ensures that all outbound traffic received from the connected host will have a VLAN tag of “210” applied to it.

For inbound network traffic, the switch must enforce that only traffic with the “210” VLAN tag is allowed to be sent to the connected server. (This is generally known as “VLAN trunking” within the networking world.) Within the NetGear switch, the following shot shows how a VLAN tag is “trunked” to accept inbound traffic with VLAN tag 210: 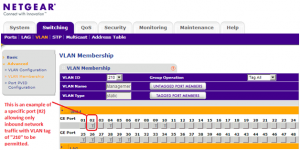 Now that the management networking is setup, it is time to setup storage networking on the switch.

In our use case, the separate Storage switch is also aNetGear GS748TS 48-port programmable device:

Except for the jumbo frames (which are not required on the Management network), this setup is basically the same as for the Management VLAN from the previous section.

Each Windows Server 2008 R2 server has at least one Network Interface Card (NIC) connected to each of the Management and Storage networks. Of course, it is best to have redundancy here as at every layer in the infrastructure: 2 switches to pass traffic, 2 NICs on each connected server “teamed” to each switch, redundant power supplies, redundant disk controllers – you name it, if you do not have redundancy then you are at risk. For this use case, however, we concentrate on the specific network settings.

For this use case, each server has dual on-board Broadcom BCM5708C 1GbE cards as well as dual standalone Intel NICs. The layout is:

Important point – always check for NIC firmware updates: In our case, the latest Dell PE2950 Broadcom firmware 7.4.8 needed to be downloaded and installed on each server. Then used the Dell PE2950 Broadcom NetXtreme II Base Driver v14.2.2 (A03). Otherwise, the Broadcom NICs are not recognized by Server 2008 R2 after applying all Windows Updates.

For each NIC, set the following advanced options:

Continue to the next section.

Up to this point we have addressed the switch programming to segment Management traffic from Storage traffic (via VLAN 210 for Management, 240 for Storage). However, we have not discussed what IP addresses each function should have.

For this use case, in addition to the VLAN segmentation we have two different IP subnets:

What the above means is that each NIC within the Windows Server 2008 R2 box will have a network address assigned to it based on the IP subnets. For the Management network, we have a single “255.255.255.0” subnet (otherwise known as “/24” because it is 24 bits of masking) that allows up to 254 distinct IPs (two IP addresses are reserved in every subnet). The same goes for the Storage network; it is also a “/24” subnet allowing up to 254 distinct IPs. The actual IP addresses will be assigned by the network administrator, but the key point here is that – just as with the VLAN tags – the Management and Storage networks have different values.

Please note that – for the Storage (“dvPgStorage”) network – there is neither gateway nor is there any DNS information. That is because the Storage network is completely internal; only the Management network requires network ingress / egress:

Note in the above that the ping command uses flags to send a jumbo frame to the ESXi host (8972 bytes by using “-f -l 8972“). This is actually the maximum size of a jumbo frame’s data – the 28 “missing” bytes are the overhead from the IP header itself; this header is automatically prepended to every data frame sent across the network.

The share is now ready to be consumed by ESXi.

In the previous section the NFS service was configured and the share created. Consuming the share within ESXi host is straightforward:

Final thoughts: The storage can now be used within ESXi like any other NFS datastore. Even with SIOC, do not be too aggressive storing VMDKs or cloning machines; Server 2008 R2 is not an officially-supported NFS provider for vSphere so you are on your own if things go wrong.